This week we continue our focus on JLR’s history as part of Women’s History Month. 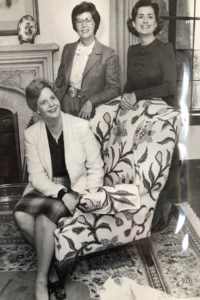 By 1980, the JLR had over 1200 members and turned its focus to pressing social issues that were affecting families and the community at large.  Two of the most concerning issues were teenage alcohol abuse and the alarming rise in drug use. JLR members recorded a series of radio public service announcements warning teenagers of the dangers of alcohol abuse.  To reach the teens, they enlisted the help of the members from the University of Virginia basketball team to record the spots – including Ralph Sampson! The famous Junior League puppets were also used to explain the dangers of drug use to children in area schools. 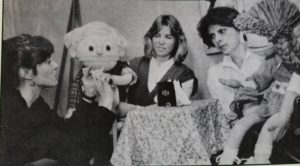 In 1982, JLR expanded its services to the elderly by providing an informational booklet about area nursing homes – “A Comparative Guide to Richmond-area Nursing Homes.”  Researched by League members, it was provided to seniors and their families through area hospitals, doctor’s offices, churches, and senior centers. The guide was updated annually and distributed for several years.

Also in the early 1980s, the League began a program at MCV (now VCU Health System) called “First Ride, Safe Ride”.  This program ensured that new mothers, who could not afford car seats had one and were in compliance with the newly passed car seat law. 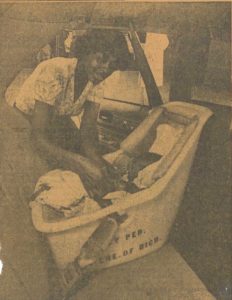 By its 60th anniversary (1986-1987), the League was known as “one of the biggest little businesses in the city, and surely one, if not the most powerful women’s organization in the city.”  The League’s impact could be seen with over $123,000 invested annually throughout the community. The League had promised $85,000 in grants to support programs as diverse as creating a visitors’ center at Maymont and continuing an education program through the Chesapeake Bay Foundation. 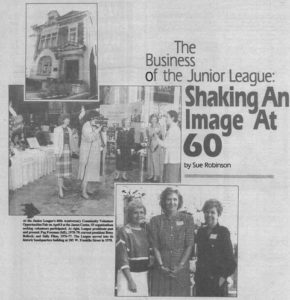 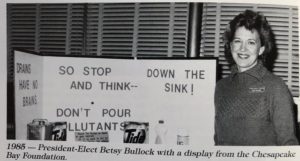 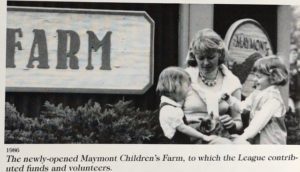 By 1987, violence on television was a “hot topic” and one that deeply concerned the League.  Not ones to sit idle, the League decided to do something about it! In conjunction with the 60th anniversary, JLR hosted a forum, entitled, “Violence on View” for the Richmond community.  The forum explored the prevalence of violence in movies, television, and rock music and what action the community could take to mitigate its effects on children. One of the workshops conducted at the summit was facilitated by Tipper Gore, at the time wife of a US Senator from Tennessee and co-founder of The Parents’ Music Resource Center.  One of the outcomes of this conference was the formation of the Coalition on Violence. The League was joined by other interested community groups to continue educating the community on the impact violence in the media had on our children and to support legislation which addressed the issue of violence in the media.

By 1989, the League estimated that it had invested over $1.5 million in the Richmond community through grants.  These funds were generated from the continued success of The Clothes Rack and the Book and Author dinner, which in 1992, included the famous author Mary Higgins Clark.  With the closing of B&A’s major sponsor and location, Miller and Rhodes, the Retail Merchants of Greater Richmond joined as sponsors of the dinner which was held at the Richmond Marriott.  The dinner’s proceeds were used to further the League’s efforts in promoting literacy in Richmond through the Metro Literacy Council. 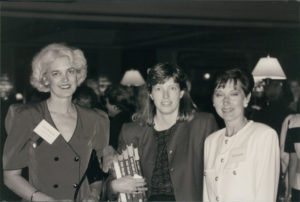 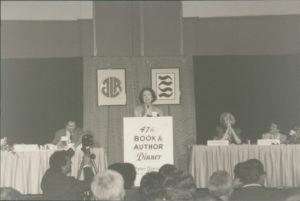 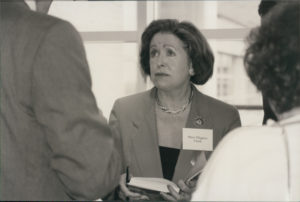 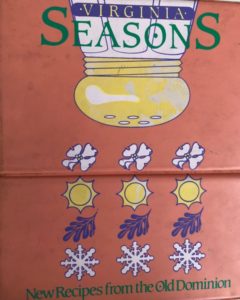 In 1989, JLR gained a new and valued employee in member Martha Ware Bryan! 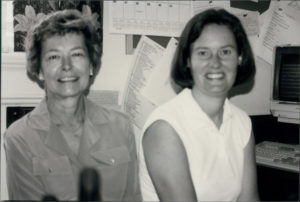 By the late 1980s, over 80% of the JLR members worked outside of the home, which was a huge shift from just a decade earlier.  The League even elected its first working President in 1988, Anne Booker. Daytime placements and meetings became less popular and the League had to adapt its programs to the working woman’s schedule. 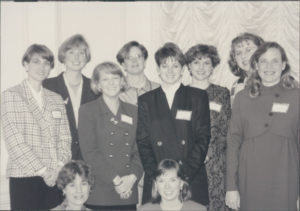 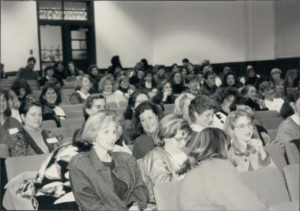 This shift in membership necessitated that the League sharpen its focus and streamline its efforts on children and education. As a result, the League began to forge partnerships with other service organizations to fill the gaps in education and children’s services.

One of the best examples of this collaborative effort was the start of a new program, the Family Resource Center, which opened in 1992 at the Sacred Heart Center in the Bainbridge area of south Richmond.  This program was open to children 2 ½ – 5 years old and their guardians. For the children, it offered a preschool setting with play and learning activities; for parents it offered basic education classes, including life skills and parenting.  A former JLR President, Vicki Blanchard’s son helped renovate the playground as his Eagle Scout project! 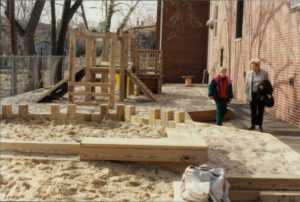 The center’s director, Rev. Michael Maruca, commented that the Leaguers had done so much for the center that he felt like he had been “sort of adopted by the Junior League.” 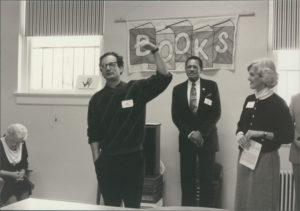 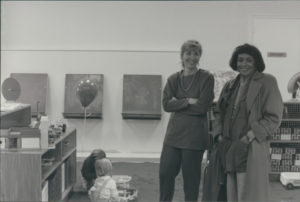 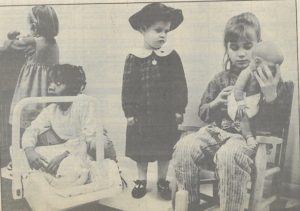 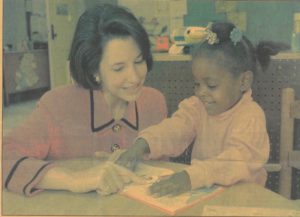 The Sacred Heart Center assumed responsibility for the program in 1995, but League members continued to volunteer their time and energy. 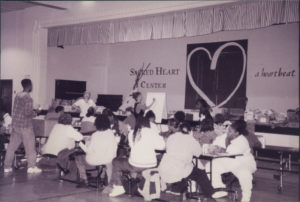 The mid-1990’s brought a new community issue to the League’s attention.  Concerned about the lack of resources for women in abusive relationships, JLR worked with the YWCA to develop a “Safe Haven” sticker for local businesses.  These stickers, posted by businesses on their windows, let women in abusive relationships know they could use their phone to call the YWCA Women’s Advocacy Hotline for help. 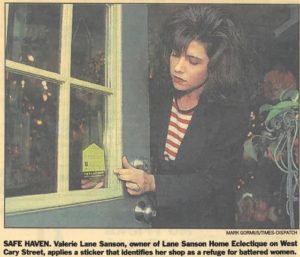 In 1996-1997, JLR celebrated its 70th anniversary, with over 1,500 members.  The members were more diverse than ever thanks to the ending of a formal sponsorship program — any woman between the ages of 21 and 45, with a desire to volunteer, could join. 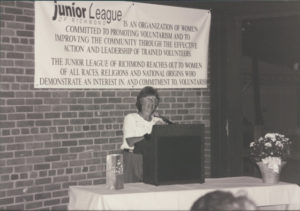 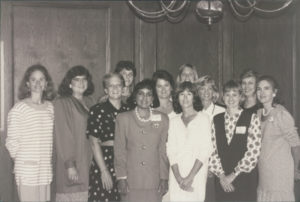 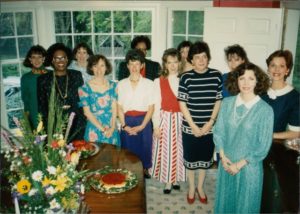 In 1998, The Clothes Rack turned 50 years old and was celebrated at a membership meeting with a fashion show spanning five decades.  The Clothes Rack also hosted a community day with storytimes for children, blood pressure checks, music, door prizes, and more. 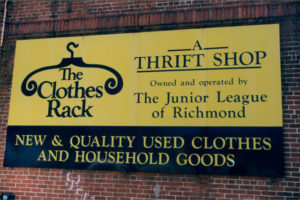 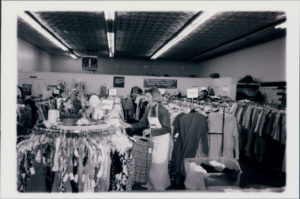 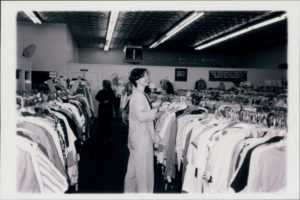 One of JLR’s award winners in this time period summed up her view of the Junior League in a way that still rings true today.  True Luck said, “The League taught me so much about my community, and it trained me for what I have done in other organizations.”  Other area organizations recognized this ability and knew that if they wanted to get things done, they had to get the League involved.  As a local organizations stated, “Everybody who uses volunteers should learn from the League how to do it.” Those words still ring true today!

Next week will be our last installment on JLR’s history – our most recent decades.